The apparently inevitable partisan political wresting on the open Supreme Court seat has already started.  But maybe there’s a different way of thinking about this.  Although, after McConnel threw down the gauntlet about letting the people decide, I am not sure anyone could blame the President from taking him at his word, one way or another.

First Fragments from a Justice Story

Scene One: Oval Office — President and Chief of Staff.

President:  With the preliminaries out of the way, is there some way we can turn this into opportunity.

Chief of Staff:  Mark (former deputy chief of staff Mark Childress) called in from Tanzania with an idea.  He reminds us that when he was director of the Access to Justice Office, following Larry (Prof Laurence Tribe), he got some bipartisan support around issues of access to justice.  He says maybe we could make this an access appointment, rather than a traditional left-right appointment.  Makes it harder to block when it’s an issue that all political groups identify with.

President:  Ya, but what’s the politics, optics, alignment.  More data, and names?  And keep moving with the vetting of the old list.

Chief of Staff:  Here’s the general polling on access to the legal system from Voices for Civil Justice. (And, Mr President, click here for another slide and credit.) 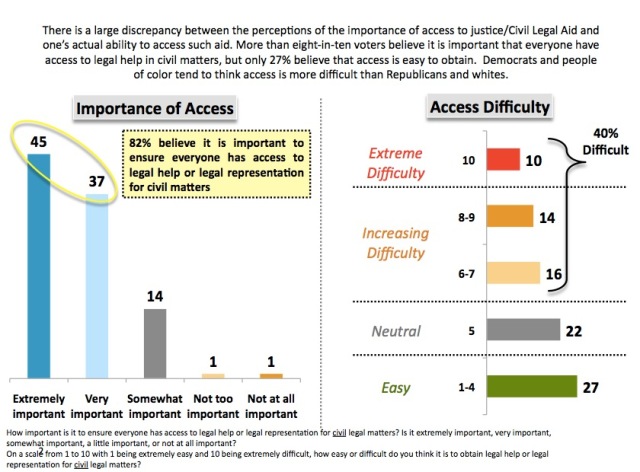 Bottom line.  Broad support, even for more money after messaging, with little vulnerability to attacks.  Key message is fairness.

Vice President Biden:  Remember, when I spoke at the LSC 40th anniversary, Scalia spoke too.

President:  What’s the evidence it is bipartisan?

To quote:  “advances include, but are not limited to, expanded self-help services to litigants, new or modified court rules and processes that facilitate access, discrete task representation by counsel, increased pro bono assistance, effective use of technology, increased availability of legal aid services, enhanced language access services, and triage models to match specific needs to the appropriate level of services.”

President:  You are kidding!

Chief of Staff:  Unanimously (of those present)!  Red and Blue states and named by both red and blue governors.  “Aspirational Goal.”

AG Lynch:  And the House Access to Justice Caucus has a Rep was well as a Dem member.

But for the Court it’s not about LSC.  Jut like the Legal Aid Inter-agency Roundtable, it’s everything that gets people heard in the legal and administrative system.  Changes in courts, court rules, services, technology, nonlawyers, advocates.

President; (Astonished expletive deleted).  Can your sound out McConnel’s people.  Would the Chiefs get behind an access candidate?

Counsel:  They have to be careful politically.

WH Chief: So, I got a way for your to dig yourselves out of your hole on this.

WH Chief: Look, so you block, saying the people must speak first.  Then you lose the Senate and the White House.  Who does Hilary or Bernie nominate — Obama?  They spoke twice on him!  And you can not filibuster, because the people have spoken.  We get that you are trying to damp down your own candidates on this, but it just makes it worse for you.

McConnel Chief: (longer string of denying expletives deleted.)  And what if we win?

WH Chief:  You sure you want that!  OK, here’s the idea.  We turn away from the culture wars, find someone who beleives in making the legal system work for all, that defangs Sanders and Trump.  Did you know Scalia spoke at the 40th anniversary of LSC?

McConnel Chief:  Are you trying to bait me?

WH Chief.  Yes!  But seriously, its about much more than funding LSC, which is not the Court’s business.  Its about opening the system. Its even about de-lawyering — making alternatives to lawyers possible.  Newt would once have liked that.

McConnel Chief:  Get me names from super red states.

Wallace Jefferson, former Texas Chief, not yet 50, African American, appointed by Ric Perry, won two cases in the Supreme Court limiting municipal liability.  Rick Casey of the San Antonio Express-News last year suggested him as an Obama nominee.  Jefferson’s great grandparents were slaves owned by a judge.  By the way, irony alert, that’s the paper that broke the Scalia story over the weekend.)

Both have played major roles in the Conference of Chief Justices, Jefferson helped get Larry to address them, and that’s when his endorsement of Access to Justice Commissions really got the idea to take off.  Jefferson starred down the Texas bar on the need for court forms.  Let me read: “The Constitution requires the Court to administer justice.  This occurs not only by deciding cases but by establishing a judicial climate in which people who lack money to hire a lawyer have a reasonable chance to vindicate their rights in a court of law.”

AG Lynch:  Lisa Foster at our ATJ office tells me that Larry’s Chiefs’ speech was the turning point in lots of things.

A final thought from this blog:  Even, as most likely, this approach goes nowhere, let try to make sure that attitudes of potential nominees on this urgent perspective are explored, and those of the nominee made clear and considered.  It might help make access to justice an election issue, which it should be.

I am deeply involved in access to justice and the patient voice movement.
View all posts by richardzorza →
This entry was posted in Access to Justice Generally, Supreme Court, White House. Bookmark the permalink.